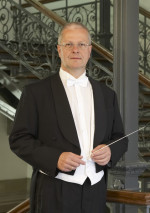 At the end of the 1980s Eckart Hübner began to lead youth orchestra wind sectionals and undertake projects with wind ensembles. Shortly afterwards, he became a sought after faculty member for leading youth orchestras in Europe, including the Youth Orchestra of Germany; Schleswig Holstein Music Festival Orchestras, Gustav Mahler Youth Orchestra; and the European Union Youth Orchestra (EUYO), where he was a resident faculty member. During his time with the EUYO, Eckart Hübner began to undertake the study of full tutti-orchestra literature, many of which included the larger romantic works, for the preparation of concerts with conductors such as Claudio Abbado, Vladimir Ashkenazy, and Sir Collin Davis, as well as concerts under his own direction.﻿

In his mid-thirties, Mr. Hübner decided to further his conducting toward achieving a more professional foundation in the subject and began his conducting studies at the Musikhochschule Leipzig (Leipzig Conservatory) under Volker Rhode. At the end of the 1990s, he was the first professor in Leipzig to have successfully completed a conducting exam. The refinement of his conducting techniques reinforced his ideals of chamber music making, especially within the orchestra﻿.

Since the end of his studies in Leipzig, Mr. Hübner has conducted within Germany: the Staatskapelle Schwerin; the Jeaner Philharmoniker; the Bochumer Symphoniker; the Kammerakademie Neuss; the Kammerphilharmonie Darmstadt; and many university orchestras. Outside of Germany, he has had many concert engagements in Riga with the University Orchestra and the Riga Sinfonietta; he frequently appears with the major orchestras in Romania, such as the State Philharmonic of Transylvannia (Cluj), the State Philharmonic of Tigur Mures, the Brasov Philhamonic (Kronstadt) and the Temeswar Philharmonic as guest conductor. In the past few years, Eckart Hübner has led the Romanian Radio Orchestra in Bucharest on multiple occasions. 2011 marked his debut with the Rotterdam Philharmonic Orchestra (RPO). In the last year, Mr. Hübner directed many projects with the Kurpfälzischen Kammerorchesters Mannheim, with whom he appears on his latest CD (Label: cpo).﻿