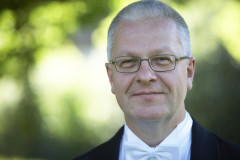 Eckart Hübner completed his bassoon studies in Hannover under Prof. Klaus Thunemann and later on, his conducting studies at the Musikhochschule Leipzig under Prof. Rohde. After his engagements as Principal bassoonist with the Philharmonischen Orchester Dortmund and the Badischen Staatskapelle, Prof. Hübner joined the Sinfonieorchester des SWR as their Principal bassoonist in 1990. He currently teaches at the Universität der Künste in Berlin.﻿

Prof. Hübner was a prize-winner in the Deutschen Musikwettbewerb in 1987 and was chosen by the Bundesauswahl to be included in the 'Platform for Young Soloists'. Eckart Hübner is a member of the Albert Schweitzer Woodwind Quintet, which amongst many other achievements, was a prize-winner of the ARD music competition in 1985. The numerous recordings of this ensemble have been praised to international critical acclaim. The complete recordings of the Anton Reicha woodwind quintets have been awarded the German disc of the year in 1989.﻿

"One of Europe's most renowned bassoonists" – Klassik Heute, Eckart Hübner is in demand with various chamber ensembles and as a soloist. He has released recordings of Franz Krommer and Anton Reichas Bassoon Quartets with the Nomos String-Quartet; Devienne's Bassoon Concertos with the Slovakian Chamber Orchestra; the premiere recording of Charles Koechlin's Bassoon Concerto with the SWR-Sinfonieorchester; as well as the Bassoon Concertos of Antonio Rosetti, in which he also conducted, with the Deutsche Kammerakademie Neuss.﻿

The past few years have proved Prof. Hübner to be increasingly in demand as a conductor. He has lead numerous projects with the chamber orchestras affiliated with the European Youth Orchestras amongst other orchestras, such as the Staatskapelle Schwerin, the Bochumer Sinfonikern, the Jenaer Philharmonie, the Kammerphilharmonie Darmstadt and the Kurpfälzischen Kammerorchester Mannheim, with whom he also recorded the Mozart Bassoon concerto and several Rosetti Bassoon Concertos in 2012. Internationally, he is a regular guest conductor with the leading romanian orchestras as the Bucharest Radio Orchestra, the Riga Sinfonietta and in 2010 he made his debut with the Rotterdam Philharmonic Orchestra.﻿

Eckart Hübner was on faculty at the Musikhochschule der Stadt Basel from 1995-1997. He joined the faculty at the Universität der Künste, Berlin in 1997 as Professor of Bassoon and Chamber music. His students have been appointed positions in leading orchestras in Germany and Europe.﻿